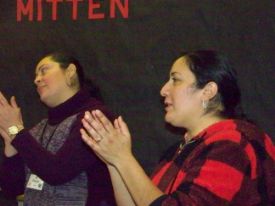 Every Thursday, three Spanish-speaking mothers at Jewell Elementary School in Bend take on the role of teachers.  They volunteer after school to teach 21 Latino students to read and write in Spanish, learn traditional Mexican songs, and feel good about their culture and themselves.
These moms form the backbone of the RAICES Spanish Literacy & Youth Empowerment Program of the Latino Community Association at Jewell.  LCA also runs RAICES at Silver Rail Elementary in Bend.
“We want the students to come to terms with who they are culturally,” said LCA Program Manager Oscar González.
RAICES (pronounced Rye-Ea-Ses) means roots in Spanish. The letters also stand for Risa (laughter), Amor (love), Ilusión (hope), Cariño (affection), Entusiasmo (enthusiasm), and Servicio (service) to the community, said volunteer teacher Margarita García. “I love to support the Latino kids so they don’t forget their culture and their roots, so they can feel proud to be Latinos.” 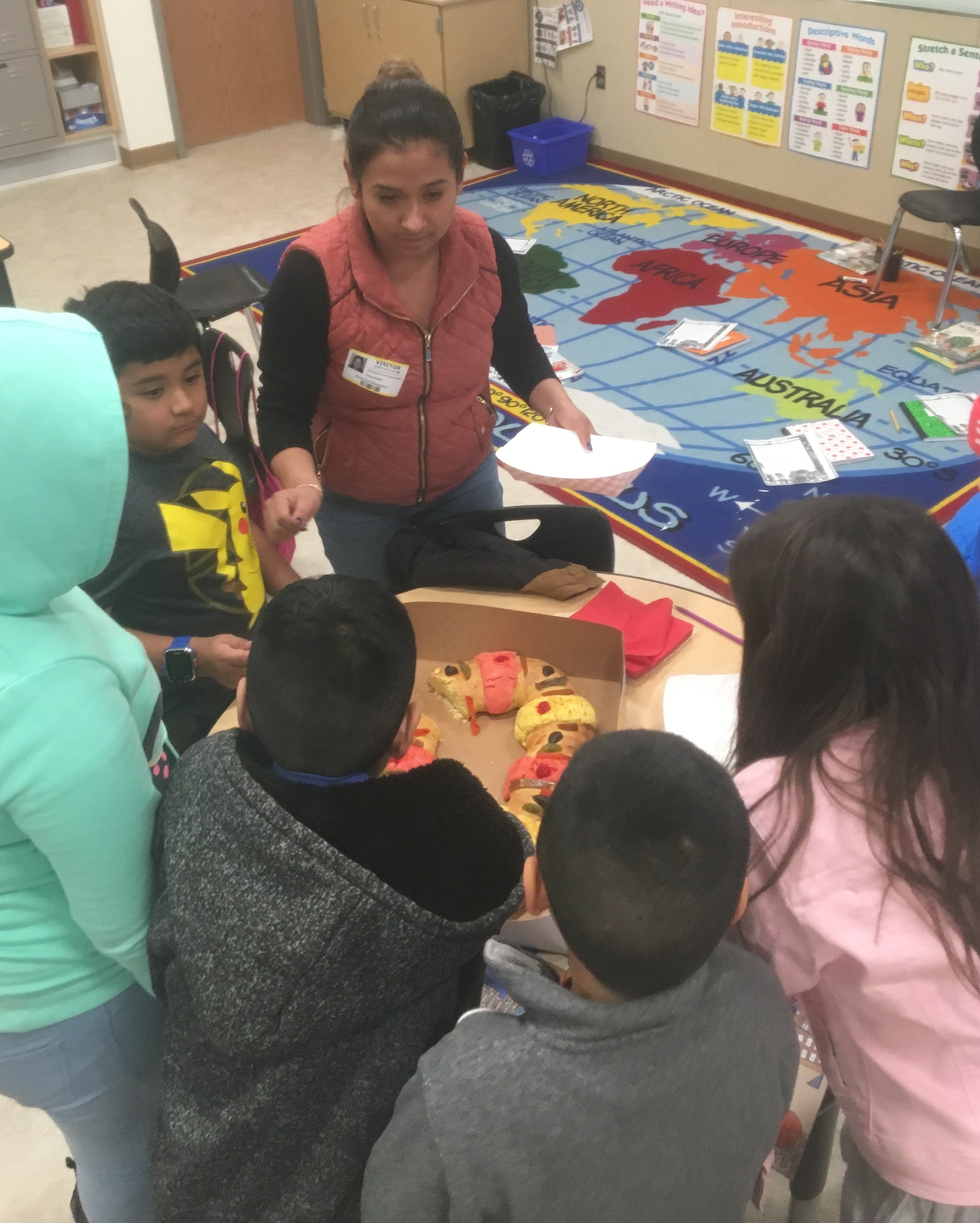 PHOTOS: Above: Margarita Garcia (left) and Pilar Cruz teach Mexican songs to their students. Left: Griselda Franco and her students sample Rosca dd Reyes (cake of kings) to celebrate the arrival of the Magi on Jan. 6. Below: Maria Rita Rubalcava helps a student create a Christmas card. Photos by Denise Holley and Renee Sanchez.
Margarita and her friends Maria Rita Ruvalcaba and Pilar Cruz helped start the RAICES program at Jewell in May 2016.
“For me, it’s very important for the kids to continue with their first language,” Maria said. Once the kids begin learning English, they may hesitate to speak in Spanish.
Pilar, who teaches the kindergarten and first grade kids, agreed. “After a few months (in kindergarten), they prefer to speak English,” Pilar said. “They don’t know enough words in Spanish.”
Growth in both languages is essential, Maria said. “A child who is bilingual will succeed in the future.”
Margarita noted that some of the kids don’t know where their parents came from and “the efforts they made to be where they are now. We are role models for our children,” she said. 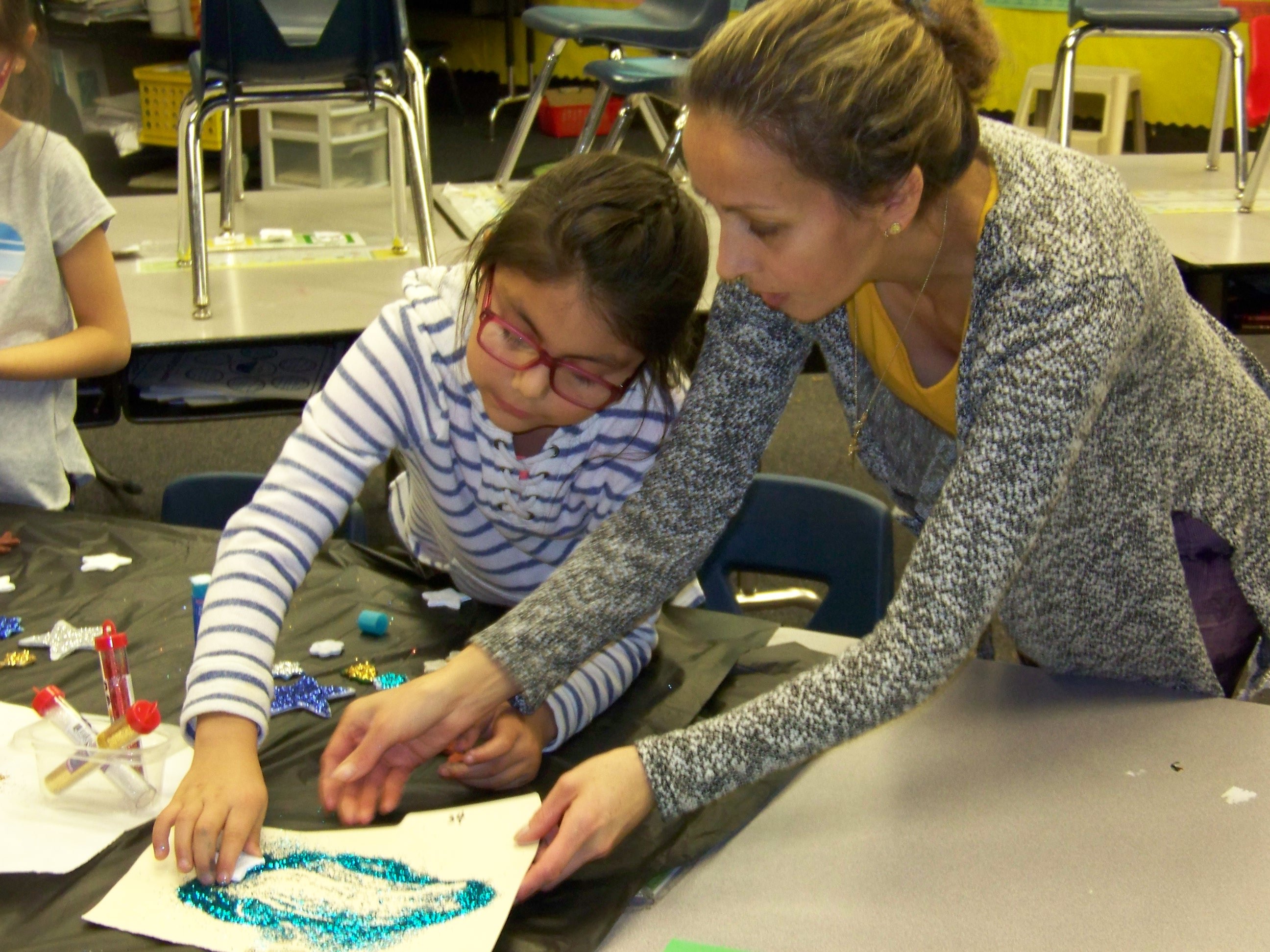 “The kids really like talking about their families,” Maria said.  The teachers said they hope RAICES will bloom and grow at other schools in Central Oregon.   Latino students at Silver Rail Elementary School in Bend are comfortable speaking English, reports LCA volunteer teacher Griselda Franco. And so is she. But on Monday afternoons, when she gathers eight students from Mexico and El Salvador, “the whole hour and a half, they have to speak Spanish,” Franco said. “It’s challenging.”
She began teaching RAICES in September and can hear an improvement in the students’ spoken Spanish, she said. During the holiday season, the class learned why the U.S. celebrates Thanksgiving and how Mexico and El Salvador celebrate Christmas.
This semester, Franco will teach the class pronunciation and “how to put sentences together in Spanish,” she said. She believes the students speak Spanglish at home and need to communicate better with their parents. “When they’re little, they have the capacity to learn more than two languages,” Franco said.
She is majoring in early childhood education at Central Oregon Community College and provides child care for parents attending LCA English classes in Bend, she said. She also works part-time in the housing department at NeighborImpact.
These volunteer moms make RAICES happen and LCA is grateful for their work and dedication.

This website uses cookies to improve your experience while you navigate through the website. Out of these cookies, the cookies that are categorized as necessary are stored on your browser as they are essential for the working of basic functionalities of the website. We also use third-party cookies that help us analyze and understand how you use this website. These cookies will be stored in your browser only with your consent. You also have the option to opt-out of these cookies. But opting out of some of these cookies may have an effect on your browsing experience.
Necessary Always Enabled
Necessary cookies are absolutely essential for the website to function properly. This category only includes cookies that ensures basic functionalities and security features of the website. These cookies do not store any personal information.
Non-necessary
Any cookies that may not be particularly necessary for the website to function and is used specifically to collect user personal data via analytics, ads, other embedded contents are termed as non-necessary cookies. It is mandatory to procure user consent prior to running these cookies on your website.
SAVE & ACCEPT
Donation matching available for a limited time! 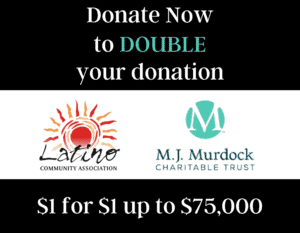 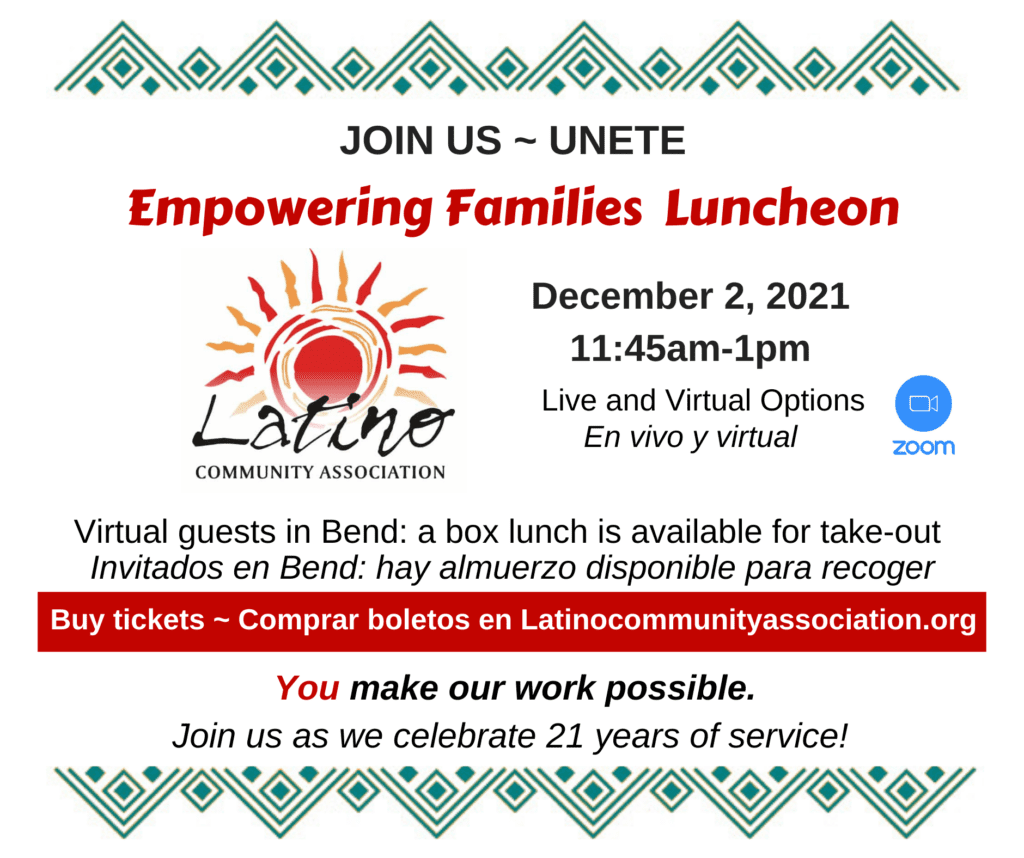